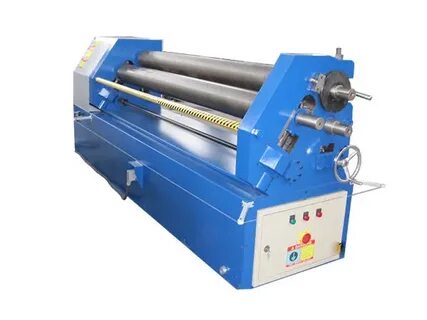 HAV series three-roll plate winder ensures the rolling power and pre-bending accuracy. All three work rollers are movable. The upper roller moves vertically, and the two lower rollers move horizontally and independently of each other. The specially designed machine can adjust the distance between the winding points according to the production demand, in accordance with the principle of the variable V mode bending machine.

The winding effect is ensured by reducing the distance between the two lower rollers. The small distance of the center line of the work roll ensures a good pre-bending effect and reduces the length of the straight section. The quality of plate rolling and pre-bending is consistent with that of expensive four-roll plate rolling machines.

With the increase of the distance between the plate rollers, the obtained winding force also increases, so with a small investment can be obtained heavy plate winding machine.

The special design reduces the working height because the lower roll moves horizontally. Therefore, even if the machine can roll up to 40mm, there is no need for foundation.

Passive or active feeding platform and plate alignment system can be used together.

EPS electric balance system is the standard configuration of HAV series three-roll plate winder. Ensure the work roll automatic balance, balance error is 0.2mm, and is not affected by mechanical wear and consumption.